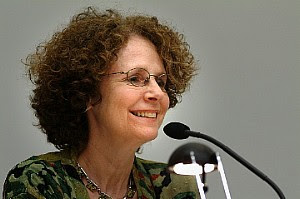 I’ve recently been reconsidering Derrida’s influence on the theorists I’ve been reading over the last month or so (as can probably be gathered from the last few posts). Today I am interesting in continuing this thread and looking at Derrida’s fingerprint on Jessica Benjamin’s text The Bonds of Love. After this post, I promise to take a break from post-structuralist readings of feminist and post-colonial theoretical texts.

In The Bonds of Love, Jessica Benjamin seeks to explore the binary oppositions that she sees operating in contemporary society, especially those between male/female; subject/object; master/slave; dominated/dominator. In her text, Benjamin begins by looking at the harmful relationships of domination that people find themselves in. These relationships are characterized by a loss of subjectivity by one person in the relationship and the usurping of this subjectivity by the other member. Once subjectivity has been usurped, violence can take place between these two parties, where one acts violently upon the other. This violence need not be physical or outright abusive, rather, it can be manifest when one person exerts power over another. (Benjamin acknowledges that there are relationships of sadomasochism that seem to find pleasure in pain, but argues that these relationships many times do not embody a total lack of subjectivity). When it comes to the violence that happens between people, it is clear that Benjamin is using Derrida’s notion of the violence that happens within the framework of the binary opposition. One term of the binary is always given privilege over the other. Benjamin is concerned with relationships of domination and, after showing how these relationships fall into Derrida’s binary formulation, seeks to “play” with them and come up with a solution to the problem of domination.

Benjamin’s solution is to retain the tension between the two terms of the binary opposition, which is an idea that Freud and Hegel (as Benjamin points out) say is impossible. Freud would argue that the unresolved tension would cause neurosis and Hegel would argue, from the dialectical standpoint, that the tension cannot last and will eventually resolve itself in a linear and possibly violent fashion into a new, third term (or synthesis). While Freud and Hegel would say that Benjamin’s idea of binary tension cannot work, Derrida would say that it can. Although Benjamin does not use Derrida’s term “play” frequently in her text, the continued tension she describes is an illustration of this play, or if you will, of Derrida’s idea of “differance” (to differ and to defer so as to never arrive at a set meaning or dialectical synthesis). The interesting part of Benjamin’s formulation is that (along the lines of Cixous) she seeks to create relationships of subject and subject, where two individuals meet on similar terms and are thus able to relate and not commit violence against one another.